Now that is a portentous title for what should be just a note — a personal note, to be sure, but one that I hope has some resonance for you photographers and other memorialists out there. As I was strolling one of my favorite patches near the Palais Royal yesterday, I saw a street chamber group uncasing their instruments and preparing to play. Knowing from experience how long it takes any group of musicians to stop chatting and tuning and waiting for whatever it is musicians wait for, I took a turn around the Palais garden and then returned. They had started playing Vivaldi. 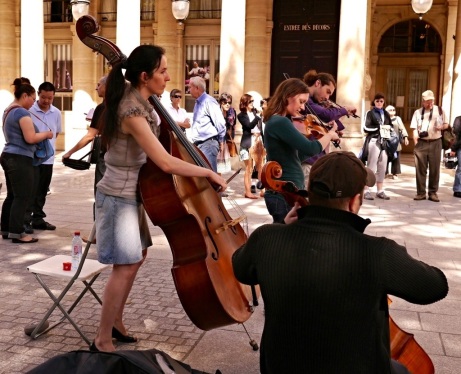 I was particularly excited to see this group because I spent parts of several afternoons photographing them a year ago on a Paris visit. The group comprises a loose collection of students from Paris’s music conservatories, and they play outside the Palais Royal and in other public spaces like the Metro to bring classical music to “the people.” It seems to work — the people gather, sit on the stone sidewalk, smile, videotape, and listen. Even the children are still, at least for a little while. A member of the group circulates to sell the group’s CDs (I bought one last year).

Two things were interesting about this unlooked for pleasure. One was that having spent no more than half an hour watching them in the same place at the same time a year ago, I felt as if they were old friends. I eagerly searched their faces to see if I could find any familiar ones, and sure enough, many of the same players were there. It was gratifying to think that somehow they had made it through another year, as had I, and that things were going well enough for them so that here they were still playing the streets.

I suspect I had this feeling of intimacy — completely bogus, of course — because I photographed them and then edited the photos and looked at them several times during the year as I organized them. These were familiar faces because I had captured them and taken them home.

The other thing that was interesting and pretty disconcerting is that I think the photographs of last year are on the whole much better than this year’s photos. Like MUCH better. Here is the concert master from last year:

Here is one of the viola guys: 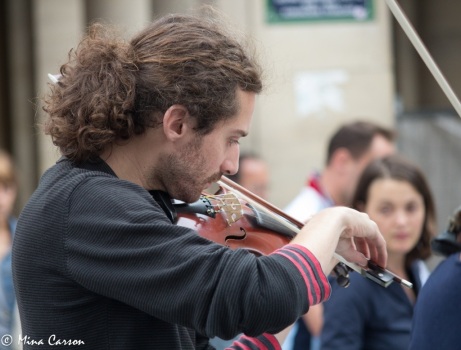 The one I like best from this year is the back of one of the cello players:

It’s not that I’m a worse photographer than I was a year ago. I don’t think people get worse unless they get scared, which can happen. Most of it, I think, is — oh, here I go again — the equipment I was using, and how it was not adapted to the job at hand. Last year, as you can see, I was using a zoom lens that put me right in the players’ faces without actually inserting my body into their ensemble space. This year I’m carrying around a prime lens with a 35mm equivalent length of 40mm — a “normal” lens, but one that doesn’t get you close to the action unless you walk there.

I’ve done some pretty nervy things this time around. Yesterday I shot a political demonstration, and it was a very cool and unsettling experience: I simply walked up to people and put the camera in their faces. I kept walking and ducking under flags and getting in close and walking a bit farther and — clearly they wanted to be photographed, and I wasn’t the only one there. But it was possible to get more interesting angles when one wasn’t interrupting the flow or calling attention to oneself.

There is still the dilemma, when the pictures are of recognizable individuals, whether it is truly OK to put them on a world stage, even if one’s world stage has an audience of five people.

I really haven’t seen the concern with privacy here that I wrote about a few weeks ago. Of course I’ve been hanging out in very busy areas, and truly I’ve gotten very sneaky about taking pictures. I suppose there are a couple of issues: one, whether the act of taking the picture is disruptive or rude; two, whether making the picture public will cause somebody discomfort. A friend was upset to find his image on the cover of a textbook; he knew the pictures were being taken in his lab, but nobody had checked with him about using his face on a book.

I’m going to stop for now. I’ve got a follow-up in mind — another amazing exhibit I saw here with a bunch of candid photos. But the photographer is a celebrity and most of his friends and subjects are celebrities and — well, you get where I’m going.

I wish those incredible musicians were all friends of mine and would come hang out in my living room (though this Paris studio would be a bit tight). It is funny that the act of taking someone’s picture would create the illusion, in the photographer, of greater intimacy than is actually there — funny, and a bit worrisome.