Robert Doisneau’s house on the outskirts of Paris is now a photography gallery. You take the RER B to Gentilly, in Zone 2 — it will cost more returning to Paris than it does getting out there. The suburb is a jumble of new and old, much more so than inside the Periphique, it seems. Doisneau’s house is the old: a small stone dwelling surrounded by modern schools,  parking garages and offices. A banner outside signals your arrival. 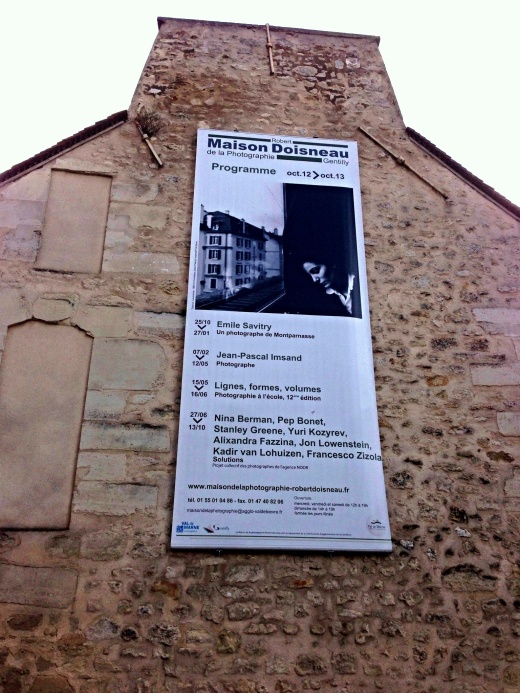 The current exhibit, ending in October, showcases eight photographers whose interlocking work invites the viewer to a ground-level perspective on the complexities of climate change for human communities. These artists constitute Amsterdam-based Agency NOOR, a photographers’ collective that, in their words, “unit[es] a select group of highly accomplished photojournalists and documentary storytellers focusing on contemporary global issues.” This grandiose language does not overstate the case, as you see when you visit their website.  These photographers capture stunning images in difficult places, both geographically and politically: dangerous places, sometimes. The photographers document hunger, exploitation, poverty, labor, political strife, disease, and discrimination.

This exhibit, “Solutions,”  follows a first exhibit called “Consequences,” which highlighted the effects of global warming and opened during the United Nations Copenhagen summit in 2009. “Solutions” focuses on projects that respond to global warming with alternative ways of cultivating food and powering our lives. Besides the exquisite photographs captured in often harsh circumstances, the theme that unites these photographers’ portfolios is their human subjects. These people are not the ones consuming the vast amount of the globe’s resources or stamping the earth with the largest carbon footprints. Many of these  people are already living marginally.

In Kenya, Cuba, Russia, Brazil, Iceland, and the Bronx, the NOOR photographers followed individuals and groups working from the bottom up to reimagine their own lives — using green solutions to stay alive. Though there is painful irony to the concept of the poorest of humans shouldering responsibility for addressing the problems produced by the richest of us, the beauty of this suite is that the ecological sustainability of these practices is essential not just for the life of the planet but for the lives of these people. There is a solar project powering lights and computers in Kenya; community gardens in Bronx neighborhoods deeply scarred by poverty and violence; an intentional agricultural commune in Siberia; windmills in China. The people in the photographs do not take heroic dimensions like those depicted by Reza in “Chants de cafe.” Appropriately, the subjects are virtually all shown interacting with their environments. Stanley Greene’s young Kenyan man, above, is one of the only subjects who almost fills the frame. While technically exquisite, these photographs express harsh daily realities as well as glimmers of hope. (This is not to say that Reza’s photographs gloss over his subjects’ hard lives — just that his choices in placing his humans against their backdrops are different and provoke different responses.) The accompanying prose is spare and dispassionate, though not detached.

Most of these photographs date from 2010. In addition to pursuing their individual projects (Pep Bonet, for example, follows the rock band Motorhead), these photographers traveled, photographed, and edited these pictures for exhibits opening this year, in the Netherlands in March and then in Paris this summer. Members of the collective also run photography workshops around the world. 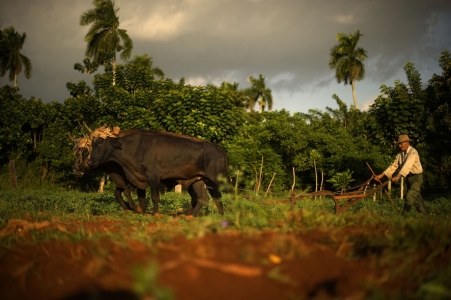 Though some major newspapers have cut back or shut down their photographic departments (shame on them), photojournalism of the most important kind — the kind that informs the head and penetrates the heart in order to change the world — finds ways to continue. Like musicians expected to play for free in cafes, for the love of their craft, photographers are asked, implicitly or explicitly, to do what they do without compensation, or to make a living taking wedding pictures and selling postcards. (The Noor website is heavily copyprotected, which I understand and respect. The photographs I have reproduced here were available on the Maison Doisneau website. Viewers may notice that they are smaller JPG files, appropriate for web viewing but not reproduction.) As with music, the digital revolution has put time- and energy-efficient resources in our hands, and that’s a good thing. But to arm print journalists with smart phones, as the Chicago Sun Times has done, in order to save money in a strapped organization, is — well — a travesty, and certainly a managerial misunderstanding of the kind of skill — literally, vision —  good photojournalists develop over time. It’s not just point and shoot.

Up the street from the Maison Robert Doisneau in Gentilly is the College Rosa Parks. On the school’s banner there is a picture of American Rosa Parks on a Montgomery bus. 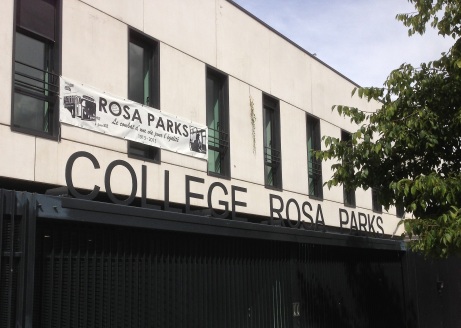 At street level is a poster guaranteeing every sixth-year school child a portable computer. “In the Val-de-Marne, equality is not just a word.”

It’s a nice cradle for the Maison Doisneau — like the populism of the berges de Seine as a setting for Reza’s coffee producer portraits.

One thought on “Greening our world from the bottom up”