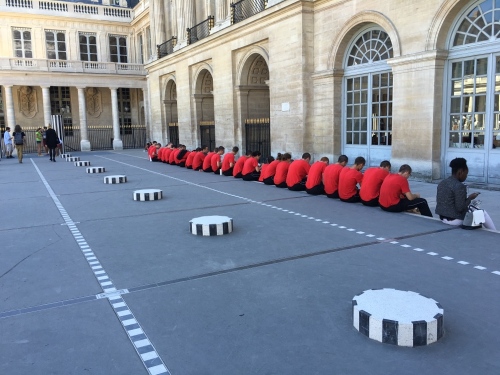 The red-shirt guys eat lunch at the Palais Royal

I shouldn’t write this in public, but I will anyway. As I get older I get lazier. Let’s just call it an intensified search for efficiency. To my annual sojourn in Paris this late summer season I did take a Fuji X100T — the camera I’ve written about several times in this blog. Yet after one outing it stayed in the rented apartment for the next ten days. I took probably a thousand photos with my iPhone instead: day, night, portrait, wide angle, street, landscape — even a couple of nonhuman creatures willing to hold still for the second it takes to capture them with that camera. 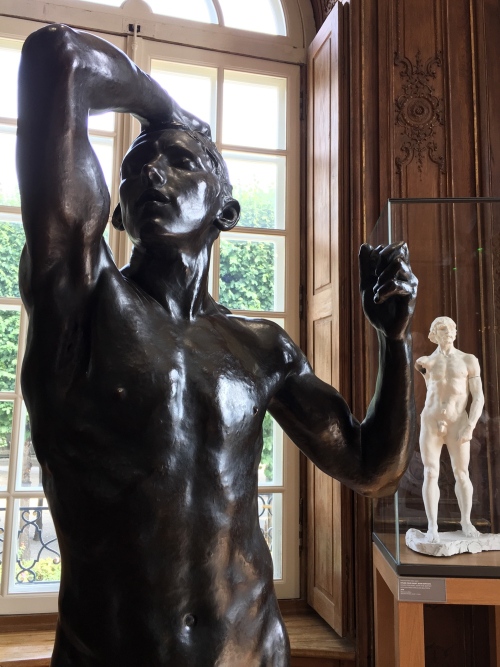 At the Rodin Museum

So, I agree, the X100T is the ideal street camera. I’ve used it a lot in the past year for events — important events — like bat mitzvah receptions and my kid’s graduation picnic. When I flew to Paris I had just come down from an intensive week of shooting a community of 250 people, day and night, all ages, all lighting conditions, and one of my most-used cameras was the X100T.

So why did I diss it, and ditch it, in Paris? Well, I told you in the first paragraph. Laziness and shyness do sometimes trump (ick — bad word choice) image quality.

But let’s talk about image quality. One of the things I do for fun — because it is not at the moment very lucrative — is place photos on microstock sites for royalty free use. I knew I’d want to place some of my travel photos, and that I would narrow the scope of useable photos if I used just the iPhone — but I did it anyway. And lo and behold, I’ve edited a couple hundred photos, uploaded about fifty to my site so far, and all but two have been accepted for sale. 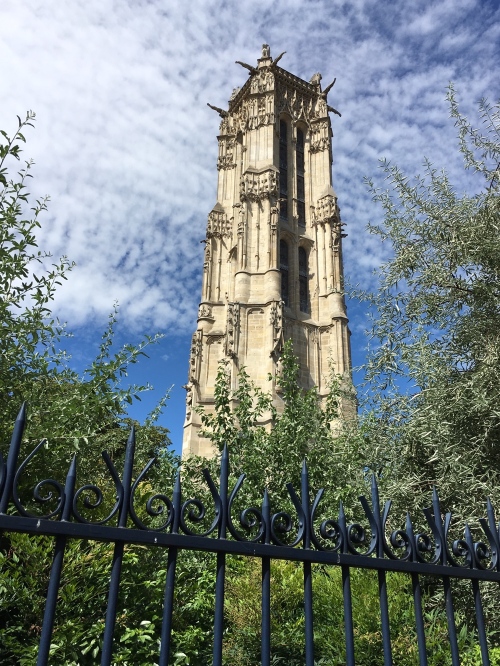 That acceptance rate reflects, yes, my experienced awareness of what the stock editors think might be attractive to buyers, but also, more importantly, the ubiquity of phone cameras and their radically increased use not only by amateurs but by people wanting to get a bit of bread with their images.

So the stock sites, many of them, are routinely using mobile photos — shots made with phone cameras. Sometimes these use the filters so commonly available through Instagram, Hipstamatic, Snapseed, and hundreds more apps, and sometimes they are “straight” shots, edited perhaps for exposure and white balance and noise control in Snapseed or Lightroom or one of the PhotoShop versions. Mine are mostly the latter. I think I used two filters this time. I just didn’t experience the temptation to use others. 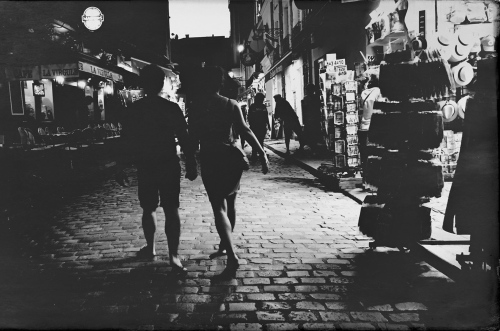 One of my filtered images. I’ve done better, but I wanted to show you what I meant.

For one thing, the weather in late August and early September in Paris this year was hot, clear, and sunny, with deep blue skies sometimes mottled with lovely cloud formations. It rained once — well, one and a half times — in the two weeks I was there. So the light was completely right for a small sensor camera with built-in noise suppressing and contrast-heightening software. 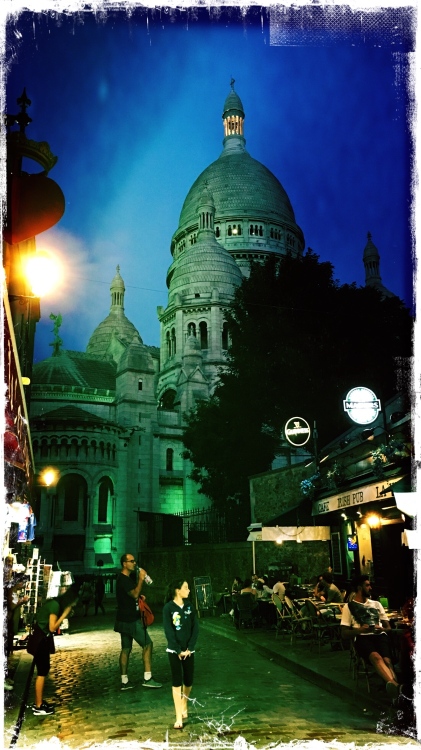 This is my favorite filter from Hipstamatic. It’s a bit over the top.

I am now using an iPhone 6s Plus. That model has optical image stabilization, which I do believe makes a difference, though probably usually a minute one. I can also preview my photo on its super large screen, which is, basically, fun as well as useful. On a sunny day of course one is shooting blind, because of reflections on the screen. Even that can be, dare I say it, fun. And the reason it is fun is that these cameras have become so good. 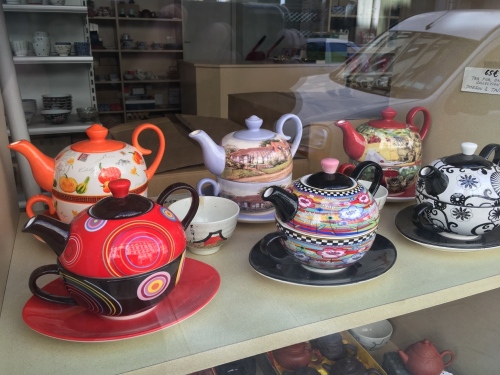 Teapots in a shop window

So what do I mean by good? Part of this judgment springs from my personal style preferences. In most of my photos I don’t miss bokeh when it isn’t present. I like super sharp photos with fairly true color…I may be the Douanier Rousseau of the photography world. I get all excited when I get a sharp, colorful image with edges so well defined they could cut your finger. On a sunny day — even on a bright, rainy day — that’s what these camera phones render. 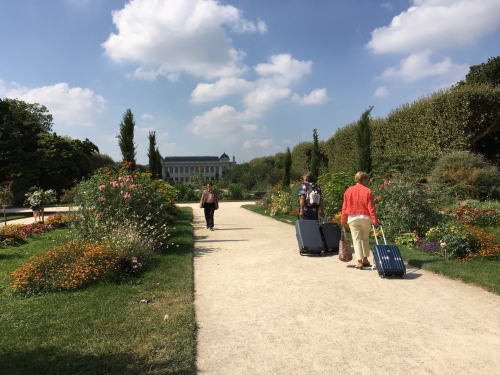 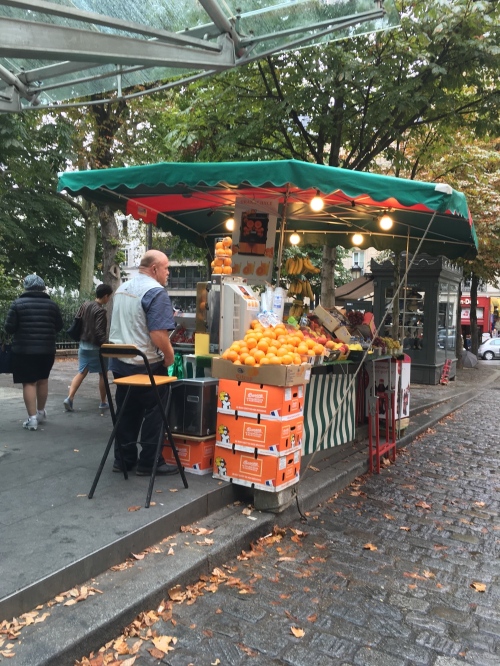 Fruit seller near the Montmartre Funiculaire

The other thing I noticed this time out is that the colors are so true with the iPhone. I rarely have to do any post processing to adjust the white balance, as I do with my more sophisticated cameras. This may reflect operator error, but it’s just the way this goes.

Actually, there is one tweak I used quite often, which is the “HDR” setting on the iPhone native camera. I kept most of the original photos, and it turns out the HDR was an improvement maybe only 60% of the time (as opposed to 80 or 90%). But the 60% is usually the sky, which is rendered some shade of blue rather than as a blown out highlight. Much better. 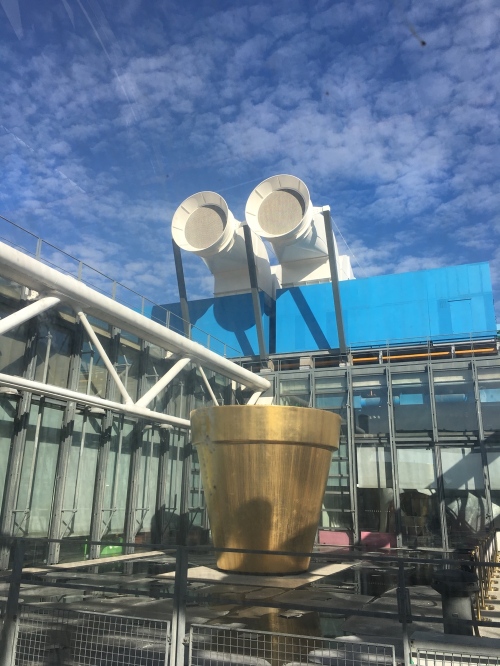 Weird stuff on the Centre Pompidou

The other thing that makes shooting with the iPhone so much fun is that really there are so few choices to make beyond framing. And isn’t concentrating on light and composition really kind of what we are up to anyway? 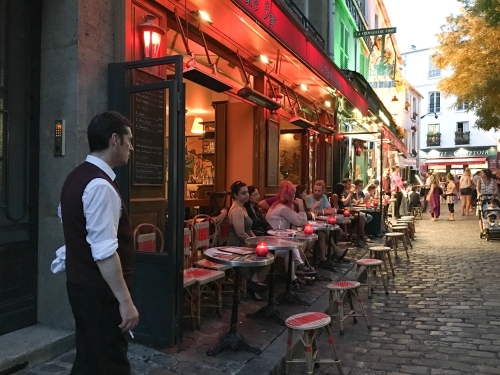 Waiter taking a break at the night cafe

I won’t use the iPhone to shoot a wedding until someone pays me to do just that. (I know some photographers have done that, though mainly in black and white or sepia, with really interesting results.) And the phone really does a mediocre job — VERY hit or miss — capturing the kinds of moments at social events that I grab with the Sony or the Fuji. My night shots on Montmartre had real limitations compared to the ones I’ve shot with mirrorless or DSLR cameras. But when you just want to have fun and experiment while blending into the crowd, this is the way to go. I’m afraid I was completely unsuccessful at looking like I was playing Pokemon Go, because I mostly shoot landscape orientation and I usually give myself away by scrutinizing my subject (despite what else I’ve written about sneaky street shooting). 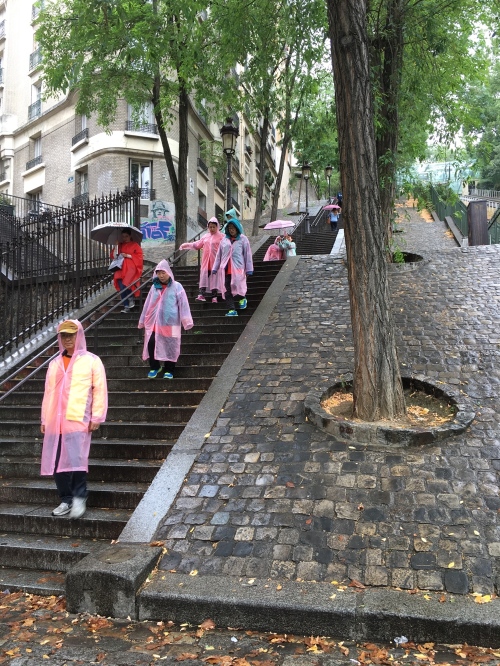 Members of a tour group in pastel raincoats

I have embarrassed myself by interpolating some of my own shots with these observations. You may hate my stuff. Oh well. A couple of comments on accessories, so to speak. Paris is really less “dangerous” than many of us think. The chance of being blown up in a terrorist attack, while real and tragic, is not very great. The chances of getting scammed on the street are much higher. The chance of having your phone grabbed away while you are using it is way less than the tour companies tell you. I am much more afraid of dropping my phone over the bridge railing into the Seine — so I buy cases that have stretchy hand grips, so that when I stroll around I can hold the phone without risking a drop. I also buy cases that hold credit cards, because if my hand is over the back of the phone (held securely by the hand grip!), people are unlikely to see the credit cards. I carry my phone in a deep front pocket or in my hand, so it is pretty much always ready. The phone is NOT NOT NOT as quick to respond as a camera is, by the way. There is no way to make that argument. It is also no more stealthy than a camera, except that you are probably not wearing it around your neck as a single-use item. But it can be made completely quiet, and it weighs nothing. A battery case or auxiliary charger is probably not a bad thing to throw into your bag in the morning. 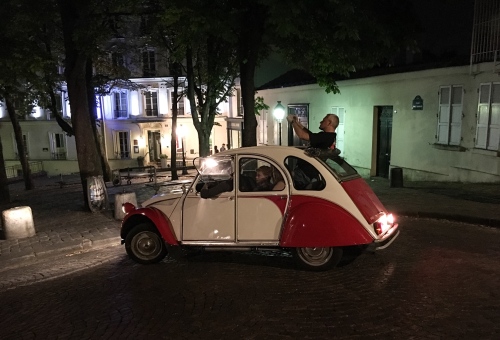 Jack in the box in a Citroen

I am really liking the specs of the forthcoming iPhone 7 Plus, with the two cameras and the larger aperture. I’m hoping to hold out for at least a few months….maybe even until next summer’s trip! 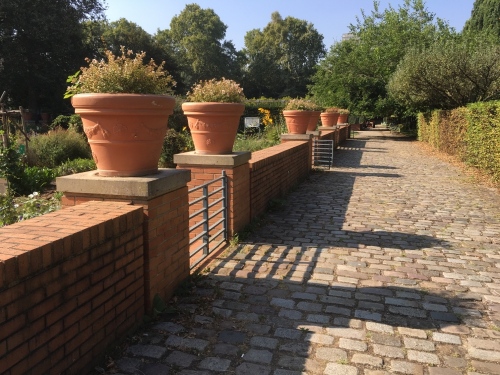