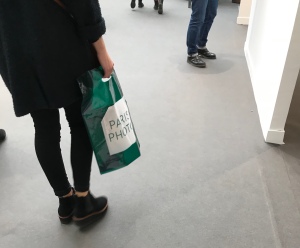 First, the organization of the exhibit is by gallery rather than individual photographer. Thus each gallery may hang a solo or group mini-show. Most presented several photographers. Second, it was delightful to discover that, while I love seeing what today’s photographers are doing, Paris Photo embraces photographers from the beginning forward. This was an opportunity to see, albeit in small doses, Cartier-Bresson, Martine Franck, Walker Evans, Cindy Sherman, Brassai, Jo Spence — and on and on. Third, after the initial sensation of being blown back by images, hundreds, thousands of images, the experience gradually settled, for this viewer, into a warm celebration of humanity. I know, I know — Family of Man rhetorical corniness. But there it is. 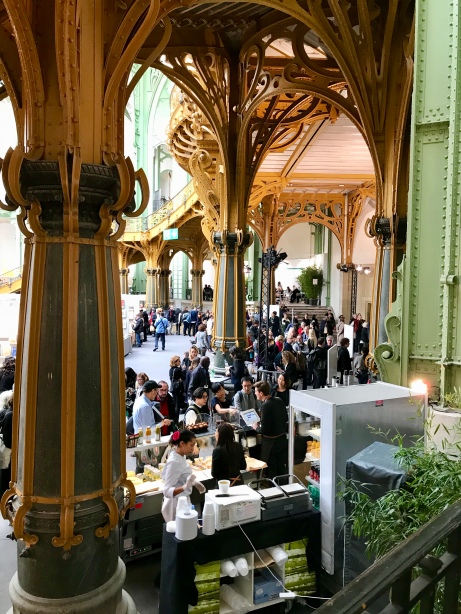 And also, for all the photographers in the crowd (and that would be practically everybody — most carried cameras, and all carried phones, and knew how to use them), the show is a challenge to see the world in our own ways. I need to admit that with one- or two-person shows, part of my response is always, “Gosh, do I see the world that way? Should I be experiencing something different between Thing and camera?” And often, “Will I ever be This Good?” And I do not imply that Paris Photo is full of mediocre shots that encourage the viewer to go and do better ones, but rather that the riotous variety of styles and visions and missions gives a warm permission to learn and study and draw inspiration and then Do One’s Own Thing. It’s thrilling, frankly.

Huewei sponsors a special exhibit at Paris Photo that highlights their current phone camera models, the p10 and the Mate 10 Pro. The specs are similar to the new iPhone X, with larger maximum apertures (f1.6 versus f1.8and f2.4). The bells and whistles are slightly different. I was intrigued, but unless my current provider (T Mobile) gets too cute with the endlessly billed protection plans, I’ll stick with the Apple universe. Too much investment already. They get ya that way. Wow, that’s a digression. The street photos displayed, by pros and students, were terrific. I do love these little gizmos. (Uh-oh, there I go, crediting the machine and not the photographer. But sometimes I get a bit tired of the prohibition on asking what camera somebody used to take that photo. Let’s stipulate the photographer’s brilliance, and then for heaven’s sake, get down to brass tacks. What camera DID you use?) 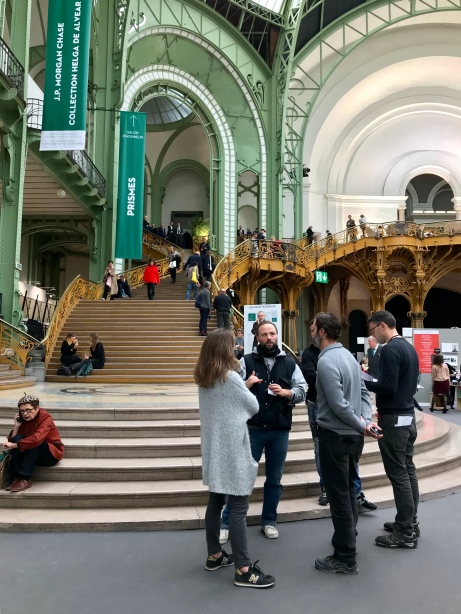 The almost 200 galleries and book dealers present such an endless range of “takes” on life, color, composition, subject, and politics, that it is quite possible for each visitor to construct her own show. The organizers invited Karl Lagerfeld to do just that this year, and so under a number of photos you see a sticker with his signature, indicating that this for him was a notable or terrific photo. These are also gathered in a book. I’ve already spent my budget on the gorgeous catalogue, so I leave the Lagerfeld book behind, but — it joins the hundreds of glorious photo books also on display and on offer at the show. 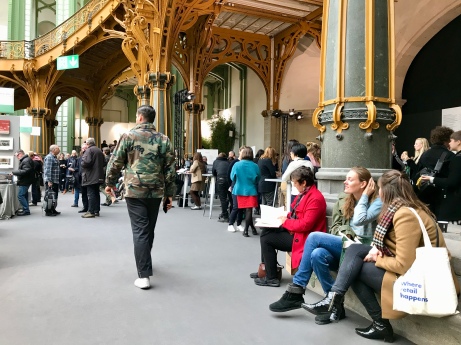 The mission part. For me, documentary and street photography almost always command my attention first, and there was lots. Among the conceptual and abstract photos, I found myself drawn to the feminist displays — big surprise. I’ve got some internal work ahead in thinking through my increasing irritation at images of naked women in museums, galleries, and public art.  I suspect the irritation is partly an ironic byproduct of my extreme good luck at being able to immerse myself in art this fall — the more art, the more naked women. Also, we have recently been inundated (and this is a GOOD thing) with long-hushed stories of badly behaving men, and so I’m super sensitized to this kind of exploitation, and it’s not like one has to hunt for it.

To do the work of figuring out a “just” response to the plethora of female images in the male gaze in art and photography, I’m beginning to sort the images into bins according to intention. That may not ultimately work for me, either, even aside from its being a fairly naive approach to criticism. (Well, the shortest route between two points….) However, one of the sponsored competitions in the show is the Estée Lauder Pink Ribbon Photo Award. The finalists were displayed in a slide show ahead of the announcement of the winner, and the images were deeply moving. Yes, of course there were naked women, but — I don’t really need to complete this thought. You know. 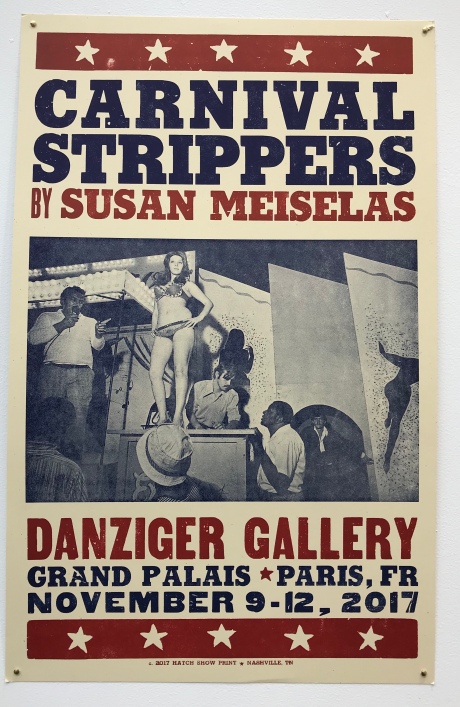 New York’s  Danziger Gallery mocked up this poster to celebrate their extensive collection of photos from Meiselas’s 1970s project of documenting women strippers in New England road shows. She was one of the earliest women photographers with a feminist agenda. I applaud that, and also compare these images to the ones offered by Lizzie Sadin, the Carmignac laureate of 2017 whose images have recently been on display at the Palais d’Industrie. I think Sadin does more contextualizing, which makes me more comfortable with the intimate and explicit images. But truly this lead photograph doesn’t need any more contextualization.

Because as the sign warned us, “All exits are final” (whoa), there was food and drink available from cheerful servers behind five or six counters. The problem was of course that the lines were killer-long by the time one was hungry enough to risk fainting by standing in one of them. Moral of the story — carry food or queue up EARLY. 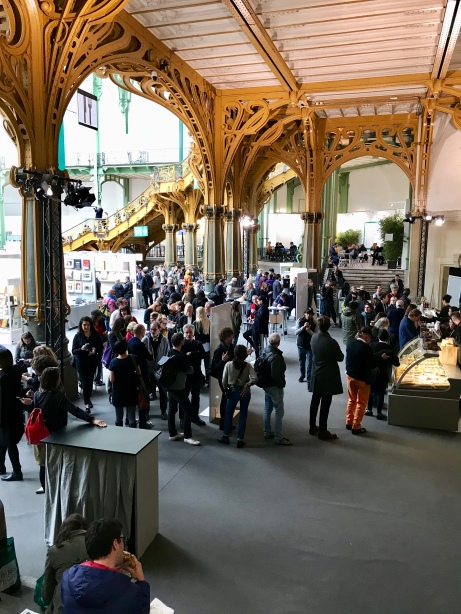 The Grand Palais itself is a heady experience. When you get a chance, GO. 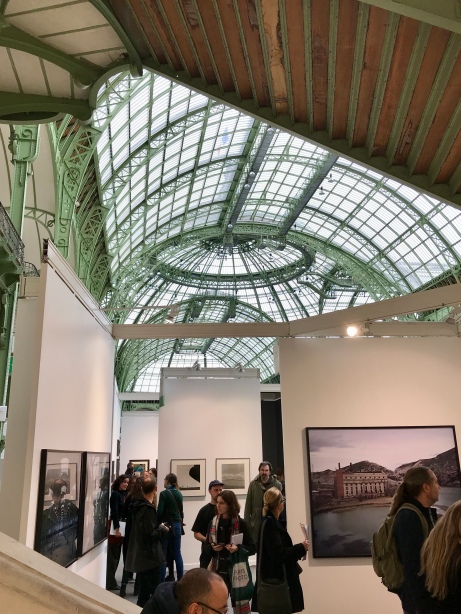